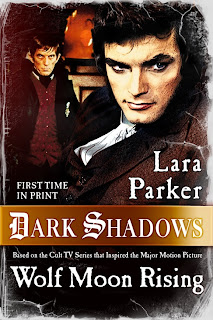 My new Dark Shadows novel Wolf Moon Rising is released in August. Here's an interview about writing the book, which was originally published on the Dark Shadows News Page...

You've recently completed the manuscript for Wolf Moon Rising. How was the writing process this time around?
Honestly? It was hard – grueling at times. This is a complicated story and there are four or five points of view from various characters, so it was much harder to write. I gave myself a difficult task, to take this whole group of characters and have their stories intertwine.

When you're writing, do you have any tricks to get you into the story?
I always pick a season. For The Salem Branch, it was fall and the trees... This time it's the dead of winter – everything's white and covered in snow. David has a snowmobile he dug out of the garage – he's quite handy with mechanical things. So he drives this snowmobile quite recklessly through the woods behind Collinwood and the sea road on the way to the Old House.

In The Salem Branch, you explored a more adolescent version of David Collins than we saw on the series...
I tend to be much fonder of my own characters – they're much more alive for me. I think that the 16-year-old David is really my creation now. When we last saw him [on television], he was eleven or twelve, but had certain characteristics that are still there. He's quite self-centred and full of himself, and thinks himself to be very smart.

What's in store for him this time around?
There's a romance between David and the young girl, Jacqueline, who are both 16. David is totally besotted – he's so in love with her that he can't think straight. But she's distant, because she's troubled by the fact that she remembers her past lives – she's actually a reincarnation of Angelique. She can remember being in Salem, being on the scaffold and Martinique and swimming in the ocean. She's very schizophrenic and unpredictable.

And what's happening to Collinwood's other characters?
Barnabas is a vampire again and his character has changed – he's colder and crueler and more despondent than ever. Quentin is suffering under the werewolf curse because his portrait is missing and he's desperate. A big part of the novel takes place in the 1920s. The kids find an old Duesenberg in the Collinwood stable, and it takes them back in time to the Prohibition era.

Sounds exciting. How did you go about capturing that period?
I had to do a lot of research. You think you know about that period in American history until you start to write it and realise you don't know all the little details – the idiosyncratic moments that make it seem real, until you start reading people's diaries or watching films.

Do you find that a new setting helps to suggest new directions for the characters?
It was really fun to expand on what I knew about Quentin's character. He's a womaniser and a rake, and of course in the 1920s he's a bootlegger. Quentin is in love with the young Elizabeth, who is 19. She's a flapper. She's wild and crazy and beautiful and full of life – she has 'it', as Fitzgerald would say. There's a raid and they're taking liquor in a hearse to the Collins family mausoleum, where they can then pry open the caskets [laughs]. Of course they find the secret room in the mausoleum and open that casket, and guess who's in it! [laughs]

So we'll be meeting a different Elizabeth in the 1920s?
She's wonderful, courageous... she climbs up on the running board of the car, shoots the cops – just like a Fitzgerald heroine. That's a complete invention – I don't think Joan Bennett was really like that. I read her biography and, time and time again, it was said that she was the Bennett sister who was reserved and patient and dependable – even though, my God, she had so many affairs! But there's a little bit of Joan in there.

How much do your experiences of working with your co-stars on the original episodes inform your writing?
The source is the person I worked with, and their physical presence in my mind, yes. But then it's my invention that Quentin's heart was broken by Elizabeth and he never loved another woman. And she grew old, while he didn't age – I find that very poignant. She turned into the Joan Bennett that we all know, while he stayed young because of this portrait. This is the part that worries me, because I think some of the fans hate it when things get re-invented.

Speaking of re-inventions, readers of The Salem Branch might have noticed a few similarities in the new Dark Shadows movie – including a hippie group in town and a newly-constructed McDonald's...
Yes. Maybe it's all just synchronicity – who knows? I could have written schlocky little books just re-doing the Dark Shadows stories, but I didn't do that. I've always tried to do something much more ambitious. So I just think it's amusing – I'm not greedy, so my reaction was to be amused. I wish them well. I am so thrilled that this movie got made.

And, to tie in with the movie, your first two novels have been reissued...
I'm so incredibly lucky, to have been able to do these books and have them published. I'm over the moon that Tor decided to reprint Angelique's Descent, because it's been out of print for 10 years now. HarperCollins just kinda dumped it – I didn't feel bad at the time, but so many fans have told me that they spent 70 or 80 dollars for a copy.

Looking back, how do you feel about those first two books?
Angelique's Descent was my first attempt, so it was kinda an outpouring of passion for my character. It seemed to appeal to the fans quite a bit. Then when I was writing The Salem Branch, I was doing my masters degree in creative writing, so I was in an atmosphere where there was a lot of respect for literary fiction. My teachers were very excited about a vampire story, and so supportive – because no one else was writing anything like that at Antioch University – it was all heavy stuff, very literary. Nevertheless, I'm very fond of it, mostly the section in Salem. It was really an attempt by me to become more of a literary writer.

Does that approach carry through to the third book?
Of the three novels, the new one's by far the most interesting, though I don't think it's very literary. I think there are lot of good scenes in it, some of which are really scary. Whether the fans will think so, I don't know. I'll just have to wait and see.

Dark Shadows: Wolf Moon Rising is out in August and can be ordered by clicking here.
Posted by Lara Parker at 02:51