Criticism of the Dark Shadows Movie

Beware that the voice of the critic should drown out the poet’s.

Here’s a quote from Laurence Sterne:

“Of all the cants which are canted in this canting world—though the cant of hypocrites may be the worst—the cant of criticism is the most tormenting.”
Tristram Shanty, vol. 3 chapt 12.

There have been a lot of reviews of the Burton/Depp movie, some bad, some so-so, some good. Irate fans have felt compelled to post everything negative they can find in a furious effort to vent their frustration after watching a movie that was different from the show.

Critics are self-indulgent wordsmiths, and what they write is “writing” just like any other. They want to turn a phrase. They want to be witty and clever, and they want to show the world how perceptive and articulate they are. There are many more negative words in their vocabulary than positive ones.

I love this definition:

“A critic is a person who goes out on the battlefield after the battle is over and shoots the wounded.”

It is appalling to me that someone who has never created a work of art can sit for half an hour in front of his computer and verbally demolish a year of another creative person’s life while blithely dismissing all the toil that went into it.

A critic is someone who can't make art, but who loves to show the world he would have been wonderful at it—if only he could!

Both the New York Times and The New Yorker praised the film and Burton’s magical touch. Those are the only two reviews I care about because they are the smartest critics out there.

Those fans who are disappointed should remember that the show they loved inspired a major motion picture with first class talents. Because of the movie, Dark Shadows will live another day, another year, another decade. Because of all the renewed interest, the DVDs have been reissued, the two films will be reissued, my books were reissued, Kathryn has written another book that is selling extremely well along with all her others, and Dark Shadows will not fade away. The legacy has been resurrected one more time.

This movie is another brilliant chapter in the history of our show. It does not replace it or erase it. It enhances it and celebrates it.

Those who feel the movie dishonored, denigrated or disrespected the TV show should keep in mind that the greater success the film enjoys, the longer the legacy will last. To excoriate the film is a bad move, no matter how you feel. If you want to see Dark Shadows remain on the cutting edge of pop culture, you should come from love and find things to praise, and there are many.

I suggest we begin a list of the things we liked, or loved, instead of concentrating on the elements we felt were unnecessary or unsuccessful.

Please add to it!

Things I liked in the movie:

The entire opening sequence with the sailing schooner in the mist.

The two children looking at one another.

Barnabas standing in front of the Great House at Collinwood, hand on hip.

The entire town of Collinsport rebuilt, including the harbor. Wow!

“Nights in White Satin” over the titles.

The grand foyer of Collinwood with the giant staircase, the carved mermaids and the chandelier.

Johnny Depp’s long (Edward Scissorhands) fingernails and his Nosferatu make-up, a tongue-in-cheek film reference and a reincarnation of the earliest film vampire.

Johnny Depp sitting up straight and proper on a bean bag chair talking to Carolyn.

Chloe Moretz dancing stoned to Season of the Witch.

Alice Cooper rocking out as only he can. The line, “The ugliest woman I have even seen.”

The “fab four” appearing at the door.

Johnny Depp hanging from the light fixture and sleeping in the linen closet.

Elizabeth with her shotgun.

The statue coming to life and grabbing Barnabas.

A Story For the Fans

So . . . a boy falls in love with a lovely, serious and soulful young girl. It is their time of innocence and discovery. Their lives are made whole by their devotion to one another, and so they marry. For five years their happiness is complete, and every day brings a new episode of delight. Then, sadly, she goes away.

The boy grows older but never finds another to compare to his beloved. He visits their old haunts and keeps pictures of her on his wall. He watches the home movies they made together over and over. He keeps her memory alive in his heart.

Then when he is much older, more cynical and less easily impressed a vibrant young woman falls in love with him, and she wants to become his wife. She is laughing, elegant, wickedly witty. But she is very different from his first love. When he is with her he can only see those differences, and not the charms she is offering to him, and he says to her, “No, I cannot marry you. You are not serious. You are not soulful. Because you are not like her, I cannot love you.” 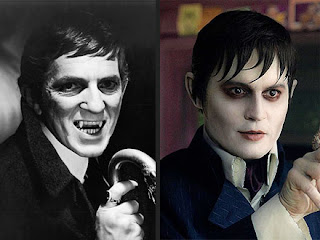 And he misses his chance for happiness a second time.
Posted by Lara Parker at 23:50 7 comments: 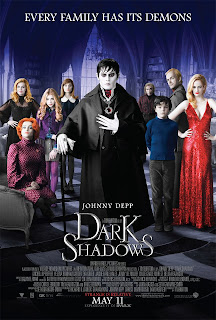 The new Dark Shadows movie from Tim Burton is now in cinemas everywhere and includes a cameo scene featuring Jonathan Frid, David Selby, Kathryn Leigh Scott and myself. Please go and see the movie and keep an open mind.

I've watched it twice and, I loved it both times. Eva Green is gorgeous and Johnny Depp creates a new and memorable Barnabas. It's gloriously entertaining and lavishly filmed. Enjoy it as another chapter in the Dark Shadows legacy, adding to the joy we have all shared.

To celebrate the release, I've added some new autographed pictures from the filming to the Online Store. Take a look!
Posted by Lara Parker at 21:49 5 comments: