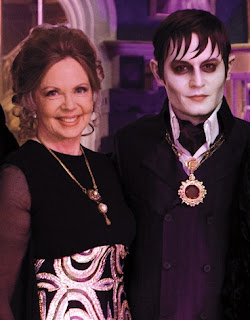 So Lara, what was your reaction when you heard that Dark Shadows was heading to the big screen?
I never thought it would get made – I was so pessimistic. This is a reinterpretation, and I feel – with all humility – that it's to Dark Shadows' credit that someone can find a new way of doing it. That's what we did on the original show – we reinvented things like Dracula and Turn of the Screw and Dorian Gray...

Do you think this film is still Dark Shadows as we know it?
When I was on the set, seeing what was going on, I could tell that the tone was significantly different. I had misgivings, I’ll admit. I thought hopefully it would be OK, but it could be a real bomb. But then I saw the first trailer and was kinda taken with it! It's an homage – it's a recognition of the value of the original material, to have made Tim Burton's imagination take off with it the way it has.

Director Tim Burton has spoken a lot about wanting to capture the 'vibe' of the original show. What do you take that to mean?
I've been asked so many times what I think was the most distinguishing characteristic of the TV show, and I think it was that the acting was realistic. Now that's not true of everyone... There were some more arch performances – people like Grayson [Hall] (Julia Hoffman) and Chris Pennock (Jeb Hawkes) – but for the most part, we played it with conviction. We were encouraged to be believable, so when a bat came in the room – and it was a Halloween toy dangled by some anxious prop man – there was no question of rolling our eyes or letting the audience in on the joke. It was played with total conviction. So here were all these absurd situations – telling ghosts to go back to their graves – but played with total conviction. That gave Dark Shadows its tone. I think audiences are smarter than they used to be. Tim Burton is letting the audience in a little more on that joke.

Hey, everybody! As amazing as it seems, ANGELIQUE'S DESCENT has gone global! The covers are as varied as the cultures where the books have been published. Different people have different interpretations, and they have even given the books new titles. Should I care? No. I'm thrilled they have translated the text, all 428 pages, and sent the book off to find new fans! This is all part of the Dark Shadows legacy. Is there a lesson here about re-imagining and re-invention?