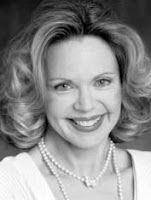 Lara Parker was born in Knoxville, Tennessee, and grew up in Memphis. She was named Mary Lamar Rickey and was always called Lamar by her family. Lamar is a family name, that of her great, great grandfather, L.Q.C. Lamar, who was a revered Southern statesman and a supreme court justice after the Civil War.

Lara attended Central High School and won a scholarship to Vassar College where she began a major in Philosophy which she completed at Southwestern at Memphis (now called Rhodes College), receiving her B.A. She attended graduate school at the University of Iowa and completed all course work on a Masters in Speech and Drama.

The summer she was writing her thesis, she acted at the Millbrook Playhouse in Loch Haven, Pennsylvania, where she played five leads in six weeks. She decided to try her luck in New York City, and the second week she was there she was cast as Angelique on Dark Shadows, a show which has become a cult classic. While she was in New York, she appeared in a Broadway play, Woman Is My Idea, and two off-Broadway productions – Lulu and A Gun Play.

Lara moved to Los Angeles in 1972 and began working in primetime television. She guest starred in numerous shows including Hawaii 5-0, Doctor's Hospital, Switch, Kung Fu, The Incredible Hulk, Remington Steele and Galactica 1980. She also appeared in several movies of the week and pilots, such as The Lazarus Syndrome, People Like Us and Desperate Voyage, along with the soap opera Capitol. She appeared in the Equity Waver production of Pinter's The Lover.

Lara is married to Jim Hawkins, a contractor and builder, and she has three children: Rick, Andy, and Caiti. Rick Parker is a successful record producer, Andy is a contractor and Caiti Hawkins is a set designer and stylist for videos and commercials.

Lara turned her creative energies toward writing ten about years ago, and now has written three novels, a collection of short stories, several screenplays, and has contributed to several non-fiction books. In 1998, Lara's first novel was published by HarperCollins. Dark Shadows: Angelique's Descent fleshed out details about the early life of her most famous character and was a bestseller, reprinted three times. In the summer of 2006, Tor Books released the sequel, The Salem Branch, helping expand the legacy of this TV classic. A third Dark Shadows novel, Full Moon Rising is due out later in 2012. To read more about Lara's writing, click here. 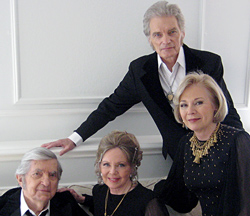 In 2004, Lara earned her Master's Degree in Creative Writing, and she now teaches at a college in Los Angeles. In 2006, she was invited to New York University, where she did a two-day workshop titled Heart of Horror, discussing the process of horror writing.

In the Summer of 2011, Lara and three of her Dark Shadows co-stars – Jonathan Frid, David Selby and Kathryn Leigh Scott – travelled to England to film cameo appearances in the new Dark Shadows feature film from director Tim Burton.

Lara and her husband live in a house they designed and built on a mountaintop in the Santa Monica mountains.


Read 20 Questions with Lara about her life and career