1.Where did you grow up?

My whole family is from Memphis, Tennessee. When I was a child I lived in New York City, actually Jackson Heights, for four years and I went to a boarding school in Connecticut. I moved back to Memphis when I was nine. I spent my summers at camp In Hardy, Arkansas. Most of my weekends when I was growing up were spent at my granddaddy's cotton farm out in Shelby County, riding my horse, Gypsy.

2. When and how did you start acting professionally?
I decided to become an actress when I was nine. I realized I couldn't sing or dance so, I thought, I didn't need any special talents to act so that's what I would be. I was very shy, but I was aggressive about getting in little plays, or on the radio. I was doing radio dramas at ten years old (it paid five dollars!) and I was working in the Front Street Theater in Memphis at fifteen. But I did very small roles. Not having any talent was a problem. I continued to work in small theaters and then in college theater and summer stock. At graduate school at the University of Iowa I did a few leading roles and I was the leading lady at summer stock theaters in Wisconsin and Connecticut. By the time I finally decided to go to New York, I had been in about thirty plays. Dark Shadows was my first professional job. 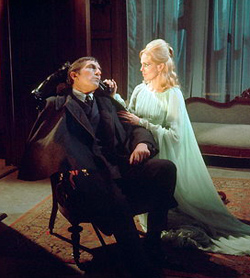 3. Would you recount the story of how you got the part of Angelique on Dark Shadows?
I was working in summer stock in Lock Haven, Pennsylvania and I decided to go to New York and try my luck. A very young agent believed in me and signed me. He got me the audition which was on camera with Jonathan Frid. I didn't realize the part was a witch. I thought is was a simple little lady's maid who had been jilted by the master of the house. Jonathan told me she was a witch and I turned a stared into the camera. I thought to myself, "Hell hath no fury like a woman scorned." Then I zapped the camera with my eyes and put a spell on the lens.

4. What's the best part of having been involved in Dark Shadows – and the worst?
Since it was my first professional job, Dark Shadows was a wonderful training ground. Doing a whole half hour show in one day, from first rehearsal to final performance, taught me a lot about trying to relax and be creative on camera. But this was the worst part as well – not enough time to really prepare or create an in-depth performance. I should say the best part of having been on the show is its lasting appeal. We didn't realize at the time that we were doing something which would become a pop icon. I also didn't realize that Angelique would be the best part I ever had.

5. How was making Night of Dark Shadows different from making the TV show?
Filming a movie is more leisurely. Sometimes I sat around all day in make-up and never shot a scene. We had six weeks to shoot an hour and a half which would have been done in three days on the TV show.

6. Did you leave New York City after Dark Shadows ended? What was the next thing you did professionally?
I went to California to play the part of the hooker in Save the Tiger with Jack Lemmon. I liked it here and decided to stay. I had two young sons and I thought this would be a better place for them to grow up. My first TV job was on Kung Fu.

7. When/how did you start attending Dark Shadows Festivals?
The first festival was called Shadowcon and I just showed up. They didn't know I was coming. I didn't even know I would be going. I decided to go at the last minute. I was mobbed. I couldn't believe it because the show had been off the air for several years. 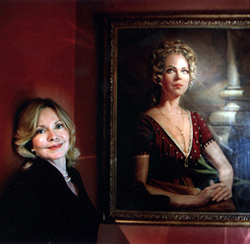 8. Are you often recognized as Angelique?
I've been recognized everywhere all over the world and in every situation – I still wear my hair the same way. It could be in the grocery store on the ski slope. The last time was in S&F Fabrics in Century City at Christmas. I'm always surprised.

9. Aside from Dark Shadows, what have been your favorite roles?
I did a part on Doctor's Hospital I quite liked, and I loved doing Pinter's The Lover on stage in LA.

10. What co-star has influenced your work the most?
I learned from all the actors on Dark Shadows. Johnny Karlen was very loose and free and always came up with something surprising. Kathryn Leigh Scott was disciplined. Her acting had finesse, very calm and clean. Nancy Barrett had excellent technique. She could cry on cue. I thought they were all much better than I was. But it was Jonathan who told me that I had the plum role and that I was lucky to have it. I always wanted to be the heroine. He taught me that it was much better to play the heavy, and because of him, I started to enjoy it.

11. What other actors have influenced you as an actress?
I admire comediennes, anyone who can make the audience laugh. And Meryl Streep.

12. Who do you keep in touch with from the Dark Shadows cast?
Everyone who is still alive. Almost everyone – except Alexander Moltke – comes to the Festivals: Kathryn, Johnny, Nancy, Marie Wallace, David Selby, Diana Millay, Roger Davis, Chris Pennock. Humbert  [Allen Astredo] stopped coming so we've lost touch with him. Kate Jackson has never come, but I speak to her once in a blue moon. And I saw Jonathan [Frid] three years ago when he and I were on CBS' 50 Years of Soaps together.

13. Can you recount any funny behind the scenes stories from Dark Shadows?
One time I set fire to my eyelashes and almost burned down the set when I lit a house of cards during an incantation. The prop man had poured on way too much lighter fluid and the thing went up in a giant explosion! We were always knocking over gravestones, catching hair on candelabras, waving a fly off a nose, and forgetting our lines. We shot "live on camera" so all our mistakes went on the air.

14. How did writing Angelique's Descent come about?
HarperCollins decided to try out a series of novels and asked me to write the first one. They thought the name of Angelique would help sell the book. I had written several screenplays in writing class but once again, Dark Shadows was my first professional job. I think my editor thought they would have to rewrite my book and they were surprised and pleased that it wasn't necessary.

16. Do you plan to write any more novels?
As for Dark Shadows novels, it is up in the air until the publishers make a decision. But I do plan to continue writing and publishing.

17. How did the book Bugs & Critters I Have Known come about?
Bugs & Critters I Have Known was written by my mother. I published it as her Christmas present. Actually I had been so excited seeing my own words in print when Angelique's Descent was published that I wanted to give her the gift of that same happiness. She was completely surprised. She wrote the poems several years ago, and put them away. To my surprise the bugs book has found a following and is selling well to school libraries. It is the perfect read-aloud book for children six to ten years old.

18. How are acting and writing similar?
I would like to continue writing for the rest of my life. Acting is too unpredictable – it's too hard to get jobs. Also it requires a hungry ego and an audience. Writing can be a solitary pursuit and it is always rewarding. Both require the same process however, the hard day-to-day work that brings those unexpected results.

19. What are your hobbies?
Sewing, skiing, gardening, horseback riding, traveling, and my new thrill... sailing.

20. What's something about you that would most surprise your Dark Shadows fans?
I'm still shy. And I'm actually a very sweet, unselfish person. Not at all like Angelique. I would never have the courage to do the things she did.